The Parish Church of St John the Baptist, the original Minster, Cathedral of Chester.

Founded as the great Saxon Minster of Mercia in 689AD by Æthelred King of Mercia, probably on the site of a Roman Christian Church or Shrine, it was enhanced in 907 by the daughter of Alfred the Great. In 973 it was to St John’s that Ædgar the Peaceful came after his Coronation at Bath, to receive the homage of his sub-kings, who legend has it, rowed him on the Dee to the Church. Fine examples of Viking/Saxon Crosses are displayed in the Church.

In 1075 St John’s became the Cathedral of West Mercia and it continued to be an Episcopal Church for many years afterwards, although Bishops tended to reside in Coventry and then Lichfield. In the thirteenth century it also became the Collegiate Church of Chester until the Reformation when its College of Vicars was dissolved.

Abbots of St Werburgh (now the Cathedral) came to St John’s on election to receive the Benediction on appointment from either The Bishop or The Dean. The first Bishop of the new See of Chester set up his seat in St John’s before translating it to the dissolved Abbey.

The first sitting of the Court of Chivalry in the fourteenth century which decided the Scrope/Grosvenor Armorial Bearings was held at St John’s.

The Organ was that used in Westminster Abbey for the Coronation of Queen Victoria in 1838 and was moved to St John’s shortly afterwards.

The architecture is priceless and St John’s, a Grade I Listed Building, is one of the finest examples in Europe of the transition from the Romanesque to the Gothic…from its massive Norman pillars to the Transitional and Early English Gothic in the Triforium and Clerestory. 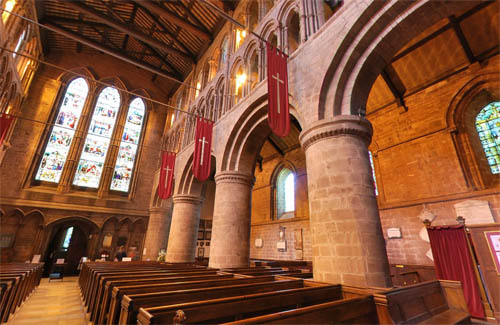