The History of Chester can be dated back to the Romans who named Chester Deva (pronounced Dewa) after the spirit of the River Dee. Roman Chester was considered as important then as Londinium (London). The Romans didn't just create a small fort here, they meant to stay, building a city for their 20th Legion. The Romans built Chester as a strategic position at the centre of Roman Britain, with plans to sail from the River Dee to invade Ireland and North Wales.

Today you can still walk along Roman roads in the centre of Chester; Via Praetoria and Via Principalis (Now Bridge St. and Eastgate). The Romans also built a network of roads from the South East of Britain to Chester and on North to Hadrian's Wall.

Good dates to see Roman soldiers dressed in all their battle armour is to visit Chester during either:

(above) Photo Gallery : The Roman's marching through Chester

Here are some good starting places if you would like to learn more about The Romans & Roman Chester :

Roman Soldier Patrol
Patrol Fortress Deva with Caius Julius Quartus! In full battle gear, he takes you on patrol and evokes the exciting adventures of an Imperial warrior.
Tours leave at 2pm from the Town Hall Tourist Info Centre, Northgate Street every Thurs, Fri & Sat throughout July and August.

The Grosvenor Museum - Grosvenor Street, Chester CH1 2DD
A good display of Roman artifacts found in and around Chester.

Soldiers of the Roman army marching through Chester,
past the Principia (City Headquarters). 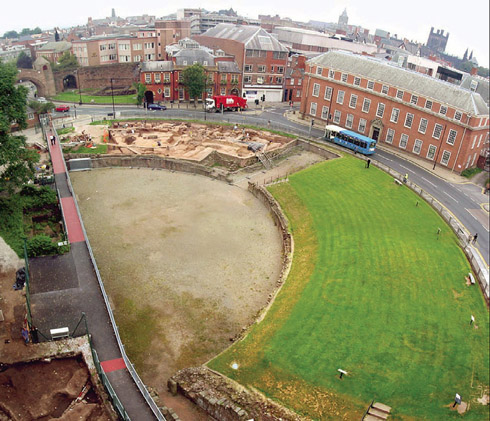 The excavation of Chester's Roman Amphitheatre.
Archaeologists working on a section of this historic site. 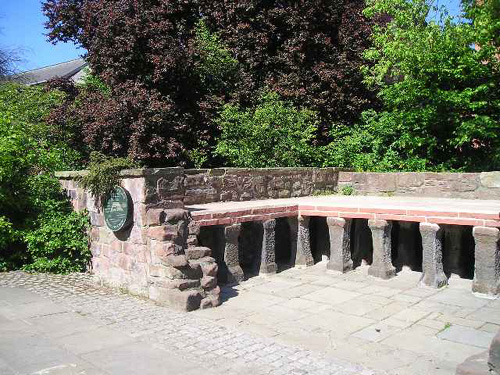 The Roman Gardens in Chester - Panorama

The Roman Gardens In Chester

In the Roman Gardens you can see Roman artifacts, stone column bases and a hypocaust (Roman under-floor heating). Panoramic Photo of Roman Gardens. A walk through the gardens takes you down some steps to the River Dee. Photo of The Roman Gardens